Sensory play is becoming more and more popular with parents and Early Years settings because of the huge benefits it has on children. You only have to look on Pinterest or do a quick google search to be overwhelmed with ideas and as fantastic as they all are, some of them can be very daunting and can put you off. Sensory play doesn't need to be difficult, or take days to set up, especially when you have companies such as Zimpli Kids who put together simple to use products such as their Slime Play and Gelli Baff which are easy to use, fun, hassle free and affordable too.


The new in thing with kids seems to be tubs of slime, and I will be honest with you, I hate the stuff and think it's a bit of an abomination. I don't like the texture - cold and claggy, and I don't like the fact Jake dropped some on his school shirt and I couldn't get it out! I tried all the tips mentioned on google and nothing worked so it went in the bin and I've been anti-slime ever since. Until now.

During British Science Week I was looking for things to do with Jacob and if you follow me on social media you will have seen that we did lots of experiments including Lemon Volcanoes and Lava Lamps with oil and alkaseltzers. Jacob really wanted to do slime but all the recipes we looked at involved about 17 ingredients and things like borax and having heard horror stories about children getting chemical burns I just wasn't willing to risk it. I popped into our local Entertainer toy store to see what children's Science kits they had in and was drawn to a shelf of Zimpli products and they were all half price!! Bonus!

Jake was super excited that Mama was finally letting him play with slime! 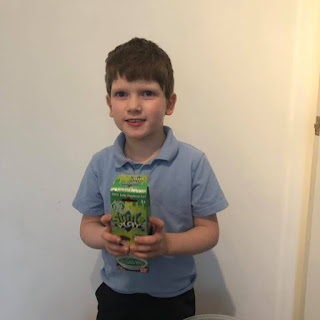 We set up in the spare room where I do most of my work with Jacob and instead of needing 17 ingredients we needed 2 things a bowl full of warm water and the packet of Slime Play. Simple! The packet of slime play just looks like coloured sand but as you sprinkle it in the water and begin to stir it with your hands the powder dissolves and it starts to thicken up. 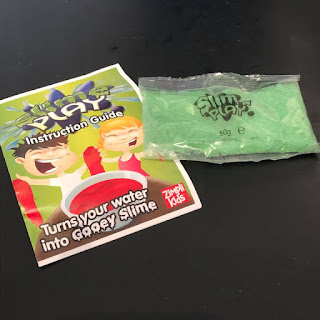 Whilst it was still quite thin Jake dunked his hands and then decided that green slime needed something submerging! Scooby figures! and so he began pretending the thickening slime was ghost goo. What great imaginative play. Once we'd finished playing with it we washed our hands and put a lid on the bowl as we wanted to come back to it later. 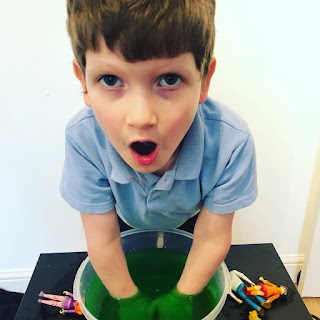 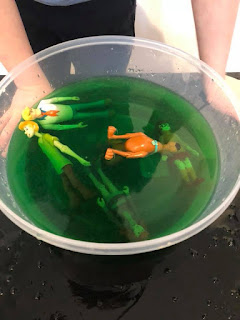 When we came back to play the slime had thickened up even more and so as it was supposed to be a Science experiment I decided we would look at viscosity. Jake has a speech disorder so it can be a little bit confusing to gage his understanding of things so asking lots of questions and getting him to give a running commentary is a great way of working on this. I asked him to tell me what it felt like and do simple tasks like see how high you can stretch the slime? Can you hold it in your hand? Will it pass through a sieve or a colander? 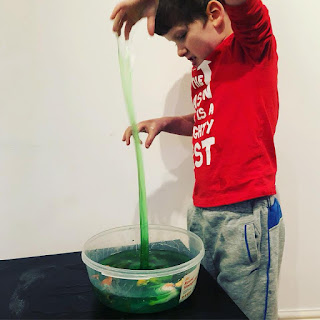 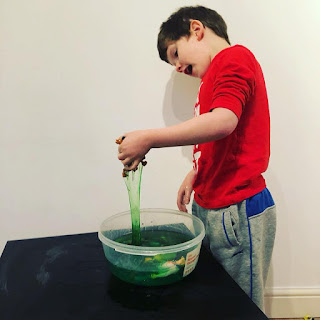 When it came to clearing up it was so easy I was shocked! You just need to keep adding water to dilute the slime and then it pours away! Magic! And mess free!

A couple of nights later I remembered the Gelli Baff. We had chosen the yellow colour change. Inside the packet were 2 sachets of powder marked step 1 and step 2. Step 1 was yellow, and step 2 was blue. Similarly to the slime they looked like coloured sand. The instructions said to add a couple of cm's of warm water to the bath and then sprinkle step 1 in and stir with your hands till it thickens, keeping step 2 for clearing up later, then you can add a little bit more water up to approx 8cm. Unlike the Slime Play the gelli bath wasn't smooth but like little lumps of jelly. Jake loved it and was soon laid in the bath and 'swimming' in it then pouring it over himself. He told me it looked like yellow snow and you should never eat yellow snow and you shouldn't eat this kind of jelly either. As he had laid down in the bath full of Gelli Baff he had some of the crystals in his hair and I did worry how hard they would be to get out especially as Jake doesn't like his head touching. I didn't need to worry though. Once Jake had had enough of playing and wanted to get out we took the step 2 sachet and sprinkled it over the bath tub and turned the shower on, Jake helped mix the step 2 powder in and the yellow Gelli Baff started to turn to green water, we pulled the plug and Jake rinsed off under the shower as it all drained away and then a final rinse of the bath and all signs of the fun he'd had were gone! 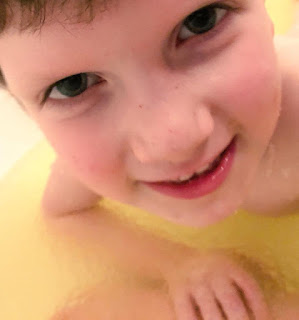 I was really impressed with both the Zimpli products we tried and would definitely recommend them. They are so easy to use and clean up and Jake really seemed to enjoy playing with them. I love that they had different colours available so you could use them in themed activities and we are looking forward to seeing what else the brand has to offer.