June in a Nutshell, how it panned out.

It's the end of June already! We are already six months through the year and it's zooming by.

June has been my worst comping month so far this year. I've had 30 prizes so stuck to my average of 1 per day which is great but value wise it's my lowest value month and there are a few reasons for that.

The first week of June hubby was off work and we finished decorating then had lots of lovely day trips to places like Yorkshire Wildlife Park and Harrogate Valley Gardens and Grasshoppers in Tong. It's great when he's off as he can drive so we can go further afield but it also makes taking Jake out easier as I struggle alone and I can't do all the things he wants to do.

We've upped Jake's hobbies! He was doing gymnastics once a week at special disability classes but we are looking for other avenues for things he loves and enjoys too. So now I take him swimming one lunch time a week with the help of my Nan, leaving us both quite tired afterwards but he's showing such progress after just a month of sessions. He's also started quad biking, if you follow me on social media you will have probably seen pictures and videos of him in his full motocross gear zooming around my Dad's factory, it's a bit heart in mouth sometimes but he loves it so is doing that a couple of times a week.

Other reasons involve breaking my laptop screen - it's still a complete mystery how it happened but it rendered me unable to comp on the laptop for a week unless I hooked it up to the TV and used the TV as a monitor, although it's fixed now. The final reason is it's been so sunny we've been playing in the garden or in the paddling pool and snoozing or just too warm to be bothered to comp. I've gone from doing a couple of Instagram comps a couple of times a day at interim periods to doing a couple of Instagram comps once every couple of days and my wins definitely show that.

Here are my wins:

The 1st of June saw my first win from Annabel Karmel of a micro-trike, this was a purchase competition where you had to buy a children's ready meal and they had 50 a month to give away I think it was. I only entered in the last month but was pleased to win as it's perfect for my niece and nephew. 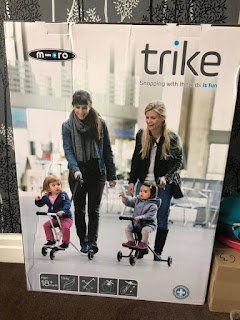 Jake had his first kids mag win on the 2nd. A Poopeez Toilet Launcher play set. It is as grim as it sounds. Poopeez are the new collectibles rage at the mo, delightful little figures in the shape of different poops, wee
s and even trumps such as Silent But Deadly! The Toilet Launcher came with two figures and you put them inside the toilet and then after a few seconds they pop up and jump out.

Lots of World Cup promos on this month and Coca Cola have a few including win a FIFA FUT code for the FIFA 18 game of downloadable content. I wouldn't usually class this as a win but as between us we've won about 8 I've decided to class it as 1 solitary win but I'm not valuing them highly.

I won two bottles of Fizzics Apple drink on Instagram it came in a lovely wooden box.

Finally after years of trying I cracked it with the Sun Puzzles and won £50 in their weekly wordsearch competition. They pay via BACS so do need you to send your bank details over which I know a few people are wary of doing but the payment hit my account and I've had no issues. Cash always helps!

John Adams was running a comp asking about peoples favourite flowers on Facebook and everybody was saying the typical ones such as Roses, Daffodils etc. My favourite is Senetti which is a beautiful white purple daisy. We won an Ezee Beads Garden Bugs and Flowers set which was a fun little activity for Jake to do. 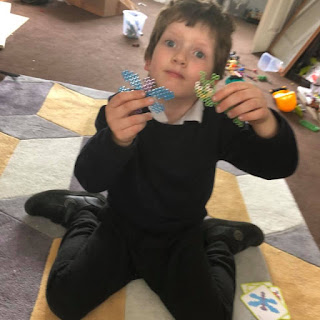 Another copy of Maze Runner: The Death Cure arrived with no note or anything so I have no clue where from. I had entered a few before I won a copy last month.

The lovely Kate Eccles on twitter @KEEccles ran a giveaway for a copy of Monster in My Wardrobe and I tweeted a picture of Jake sat on top of one of my wardrobes saying we hadn't found a monster in the wardrobe but we had found one on top. It was a lovely read and the publisher wrapped it like a present which was a nice touch.

Another twitter win was a Femme Cup from the Powder Room. I was the only entrant and it was just a case of retweet and reply with a hashtag tagging a friend.

Jake won some Shopkins Cutie Cars from a children's magazine.

Anyone who knows me knows I LOVE Harry Potter. Bloomsbury Publishing have brought out some new special editions of Harry Potter and the Chamber of Secrets and they ran competitions on their social media to win a house special. I entered for Gryffindor and you had to say what password you would give for the Gryffindor house. I said Voldemort - because most are too afraid to say his name, but Gryffindors are brave, courageous and daring!

Frubes have a no purchase necessary competition to win colour changing goodies - I keep forgetting to enter (I am rubbish at dailys!) but managed to win a colour change wristband.

Jake had another delivery! (He's done bloody well this month from children's magazines!) This time it was some Mickey Mouse jigsaw puzzles.

On Instagram I won a Sister gift box. I actually found this when looking for twitter comps that were ending soon, you could enter on both twitter and instagram and it was ending soon with low entry numbers. It's a nice gift box with necklace, hot choc, notebook, bath bomb and chocolate mallow treat in. 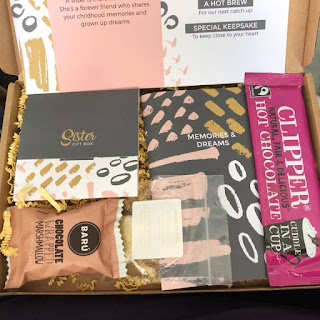 Another twitter win this time from KBB Ark of a Kohler speaker that goes inside a shower head! Super cool!

ANOTHER win for Jake from a kids mag of a DC Match game, there were 10 prizes up for grabs and my mag group managed to win 8 of them so I was super pleased, although a clean sweep would have been lovely! 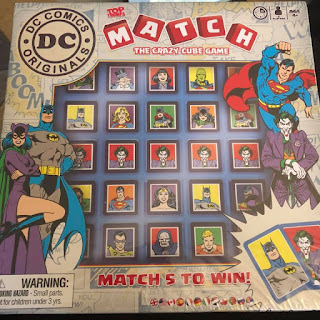 I won a lovely stationery bundle on Instagram that I can't wait to receive as I love stationery and all the bits look super cute.

A local shopping centre ran a competition for Love 2 Shop vouchers. I always enter their competitions but this is the first time I've ever been lucky with them. I won £25 which we had to collect in person, they originally wanted to take publicity photo's but when I explained my anxiety of having a photo posted publicly and people being able to criticize me due to my physical appearance etc they were lovely and said I didn't have to. I used the vouchers to buy The Greatest Showman and Coco on DVD as despite lots of trying I never managed to win them. We've only watched Coco so far but it was so good! The other £5 I used to buy ice lollies in Iceland - much needed in this heat haha.

I also won a Darkest Hour DVD from a web comp.

Oh look, another win for Jacob, this time some Paw Patrol books.

I won a MojMoj toy on Instagram these seem to be along the likes of L.O.L Dolls and the type of opening a surprise.

I won a copy of No Guilt Pregnancy Plan  from Mumsnet, here's hoping me and hubby get the chance to use it!!!

Milkshake magazine had a twitter competition where they wanted kids to make a mask and send a picture with a hash tag, there were hardly any entries and we got ours in last minute and won a copy of Chicken in the Kitchen. 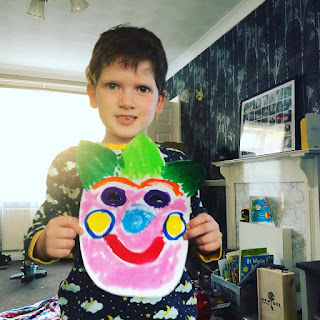 2 Scrub Daddy sponges and a stand were won from Instagram. I love how they are smiley faces but I've been sat using one as a stress ball all afternoon as I love the way it feels when you squish it, it's hard but soft at the same time. 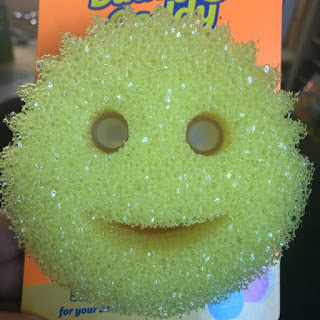 Every Tuesday on Facebook Disney Jr have a 'Tea Party' with multiple prizes where you have to answer questions. We won a Mickey's Racers bundle on it this week. Two soft toys, a cup and a toy driving license. 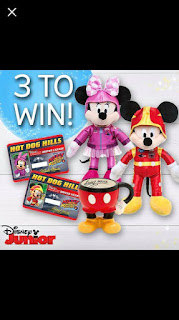 You can tell I started to get back into Instagram a little bit towards the end of the month as I had two more wins on there. Some gorgeous leather sandals for Jake from Chipmunk Sandals and an Aquabeads set from one of their daily comps. 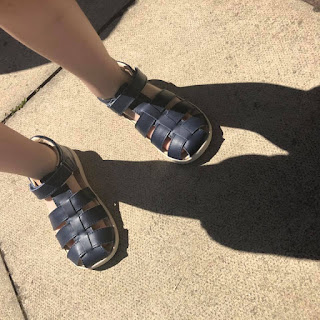 One last kids mag win for Jake of an Ookiverse book, we already have this so when this arrives we will pass it to my cousin.

My last win of the month was a fab bundle of DVDs from Movie Weekender. There are some classics in there and a couple I've not seen before. 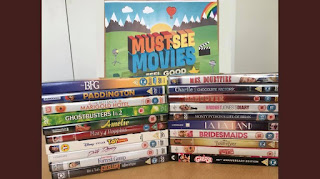 So there you have it. In a nutshell my June has consisted of DVD's, Books and Children's prizes haha. It's almost as if the comping Gods know the summer holidays are on the way and we may need things to keep us busy!

Have a great July everyone, I hope the lovely weather holds up for us all.

My stats for the month are:
Total Number of Prizes: 30
Total RRP of Prizes £664
Breakdown of Prize type: 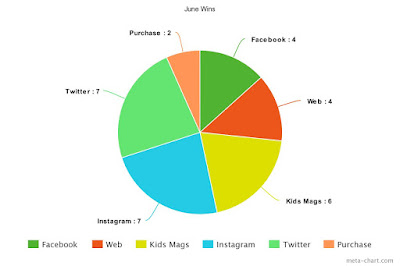