The cinema for me is like a safe haven.

I get to sit there in the dark, enjoying a good movie (well mostly good) and be around people without the pressure of having to talk to anybody which for me is always a good thing. It used to be that I would happily go to the cinema alone and would see several movies a week, that was before the anxiety took over and I stopped leaving the house alone, so now I look forward to going with Ant whilst J goes to his Grandma's.

I want the cinema to be something J can enjoy too, but a movie can be hard for any child to sit through in full, without adding in Autism, ADHD and sensory issues, which can take the formerly safe haven cinema trip to a stressful trip. Trying to hush him, trying to keep him in his seat, hoping he doesn't interrupt the movie for everybody else and spoil it for them or have them telling us to be quiet and feeling like we have to leave - my worst nightmare.

Then a few nights ago my friend messaged me reminding me I had some codes for cinema tickets to claim and that they had to be claimed that day but could be used any Sunday for the next 3 weekends. So I had a look at the cinema listings for a Sunday, and there it was in big bold letters

AUTISM FRIENDLY SCREENING - the lights are kept on low rather than fully off, the volume is adjusted, and it's much more relaxed allowing for movement and noise from the audience.

I mentioned to Ant that they were showing Smallfoot and he was willing to give it a go so I booked it.

The Autism Friendly Screenings are general admission which means you can't choose your seats at the online booking stage, which I will admit sent me into a mild panic as I like to know exactly where I am sitting and know that I won't have to sit next to anybody else (apart from Ant or J) I was also worried that it could be super full and we wouldn't find seats or be able to sit together so we set off a bit early - one so we could get there on time as the Abbey Dash was on and there were a lot of road closures near us, and secondly to make sure we got seats.

The Cineworld at White Rose Centre Leeds is a fairly new addition to the shopping centre but it's fast becoming our favourite cinema despite there being a Vue only a mile from our house. 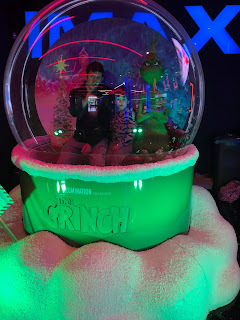 As we entered the cinema foyer they had a Grinch Snowglobe set up which J and Ant both had a quick turn in although the picture didn't come out brilliantly. Then we showed the digital ticket on my phone and were shown to our screen. We were the only ones in there for several minutes which gave J a chance to decide where we should sit (with much guidance from Mama) before approximately 10 other families came in in dribs and drabs.

The good thing about Autism Friendly Screenings is there are no adverts or trailers. You are straight into the film.

Smallfoot was a fantastically funny film that me and the boys really enjoyed. Lots of laugh out loud moments and speculation between me and Ant as we tried to deduce which actors voiced which character. After about one hour a lot of the children became restless - a few audible noises, moving in their seats, one little one walking about - but it was all ok. There was no trying to shush the children or tell them to sit down, keep still, be quiet. It was relaxed and meant we didn't need to worry when J started his rocking in his seat and we could still enjoy the film.

Overall it was a great experience and has made me really happy that I get to share my love of the cinema with J. We can't wait to go see the new Grinch movie in a couple of weeks time.

When coming out of the cinema to head back to the car we spotted one of the White Rose Centre's Christmas Displays - a giant Mickey, Minnie and Pluto. J likes to tell everybody Pluto is a dog, not a planet, so we stopped for a quick photo opportunity and a play on the park before heading home. 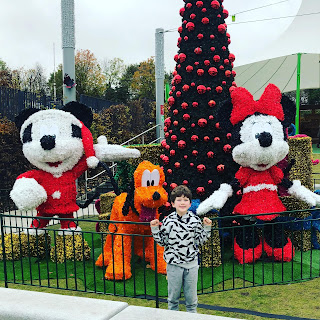